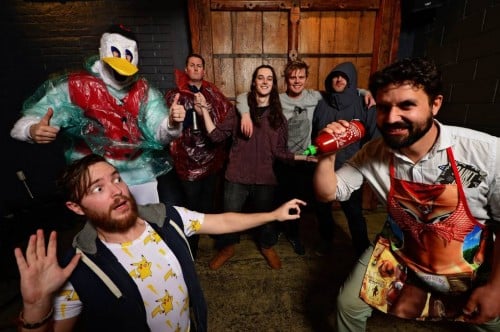 When it comes to comedy debates the Crash Test Funnies and Fresh Comedy know how to bring the laughs.

Producers Stewart Bell and Andy Collings are planning on doing just that when they grace the stage accompanied by some of Launceston’s finest comedians on August 31 at Saint Johns Craft Beer.

The Headspace Comedy Debate was created as a collaboration between Collings and Bell in support of Headspace to raise funds for youth in the community.

Bell said that there will be two teams battling it out with the theme being “Laughter is the best medicine.”  The night will be hosted by Kerri Gay.  Funds will be raised through door sales but there will also be a live auction.

“We’ve just been given a pass for Party in the Paddock for the show next year, but if anyone would like to donate prizes it would increase the donations for Headspace,” Bell said.

Both Bell and Collins have been involved with Headspace in the past and see the debate as an opportunity to help the youth centre to continue their work.

“A lot of young people involved in comedy locally do have issues with anxiety and depression, so I think it’s really important,” Mr Collins said.

The for and against teams include Jake Baylis, Dan Taylor as Pluckaduck, Gerard Lane, Ned Townsend, Stewart Bell, Andy Collings and Bill Armstrong.

“It’s going to be a fun night, lots of healthy rivalry between us and jokes galore, all for a good cause.”

The Comedy Debate will take place at St Johns Craft Beer.  Entry is $10 and the event starts at 7.30pm.  Anyone wishing to donate prizes can email andyccollings@gmail.com